"Diamond Dogs" is the eighth studio album by the English musician David Bowie, released on 24 May 1974 by RCA Records. Thematically, it was a marriage of the novel Nineteen Eighty-Four by George Orwell and Bowie's own glam-tinged vision of a post-apocalyptic world. Bowie had wanted to make a theatrical production of Orwell's book and began writing material after completing sessions for his 1973 album "Pin Ups", but the author's estate denied the rights. The songs wound up on the second half of Diamond Dogs instead where, as the titles indicated, the "Nineteen Eighty-Four" theme was prominent.

Though the album was recorded and released after the 'retirement' of Ziggy Stardust in mid-1973, and featured its own lead character in Halloween Jack ("a real cool cat" who lives in the decaying "Hunger City"), Ziggy was seen to be still very much alive in "Diamond Dogs", as evident from Bowie's haircut on the cover and the glam-trash style of the first single "Rebel Rebel". As was the case with some songs on "Aladdin Sane", the influence of the Rolling Stones was also evident, particularly in the chugging title-track. Elsewhere, however, Bowie had moved on from his earlier work with the epic song suite, "Sweet Thing"/"Candidate"/"Sweet Thing (Reprise)", whilst "Rock 'n' Roll With Me" and the Shaft-inspired wah-wah guitar style of "1984" provided a foretaste of Bowie's next, 'plastic soul', phase. The original vinyl album ended with a juddering refrain Bruh/bruh/bruh/bruh/bruh, the first syllable of "(Big) Brother", repeats incessantly. "Sweet Thing" was Bowie's first try at William S. Burroughs' cut-up style of writing, which Bowie would continue to use for the next 25 years.

Although "Diamond Dogs" was the first Bowie album since 1969 to not feature any of the Spiders From Mars, the backing band made famous by Ziggy Stardust, many of the arrangements were already worked out and played on tour with Mick Ronson prior to the studio recordings, including "1984" and "Rebel Rebel". In the studio, however, Herbie Flowers played bass with drums being shared between Aynsley Dunbar and Tony Numan. In a move that surprised some commentators, Bowie himself took on the lead guitar role previously held by Mick Ronson, producing what NME critics Roy Carr and Charles Shaar Murray described as a "scratchy, raucous, semi-amateurish sound that gave the album much of its characteristic flavour". Diamond Dogs was also a milestone in Bowie's career as it reunited him with Tony Visconti, who provided string arrangements and helped mix the album at his own studio in London. Visconti would go on to co-produce much of Bowie's work for the rest of the decade.

The cover artwork features Bowie as a striking half-man, half-dog grotesque painted by Belgian artist Guy Paellaert, based on photographs of Bowie by Terry O'Neill. It was controversial as the full image on the gatefold cover showed the hybrid's genitalia. Very few copies of this original cover made their way into circulation at the time of the album's release. According to the record-collector publication Goldmine price guides, these albums have been among the most expensive record collectibles of all time, as high as thousands of US dollars for a single copy. The genitalia were airbrushed out from the 1974 LP's sleeve on most releases, although the original image was included on the Rykodisc/EMI rerelease of the album in 1990, and subsequent reissues have included the uncensored artwork. (The 1990 packaging also resurrected a rejected inner gatefold image featuring Bowie in a sombrero cordobés holding onto a ravenous dog; like the cover, this artwork was a Guy Peellaert image based on a photograph captured by Terry O'Neill.) 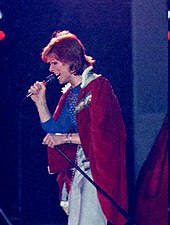 The record was Bowie's glam swan song; according to author David Buckley, "In the sort of move which would come to define his career, Bowie jumped the glam-rock ship just in time, before it drifted into a blank parody of itself". At the time of its release Bowie described Diamond Dogs as "a very political album. My protest ... more me than anything I've done previously". Disc magazine compared the album to "The Man Who Sold the World" (1970), while Rock and Sounds both described it as his "most impressive work ... since Ziggy Stardust". It made No. 1 in the UK charts and No. 5 in the US (where the song "Rebel Rebel" proved popular), Bowie's highest stateside placing to that date. In Canada, it was able to repeat its British chart-topping success, hitting No. 1 on the RPM 100 national albums chart in July 1974 and holding it for two weeks.

Diamond Dogs' raw guitar style and visions of urban chaos, scavenging children and nihilistic lovers ("We'll buy some drugs and watch old bands / And jump in the river holding hands") have been credited with anticipating the punk revolution that would take place in the following years. Bowie himself described the Diamond Dogs, introduced in the title song, as: "all little Johnny Rottens and Sid Viciouses really. And, in my mind, there was no means of transport, so they were all rolling around on these roller-skates with huge wheels on them, and they squeaked because they hadn't been oiled properly. So there were these gangs of squeaking, roller-skating, vicious hoods, with Bowie knives and furs on, and they were all skinny because they hadn't eaten enough, and they all had funny-coloured hair. In a way it was a precursor to the punk thing."

Bowie played all of the album's songs except "We Are the Dead" on his 1974 Diamond Dogs Tour (recorded and released as "David Live"). "Rebel Rebel" featured on almost every Bowie tour afterward, "Diamond Dogs" was performed for the 1976 "Station to Station", 1995–96 "Outside" and 2003–04 "Reality" tours, and "Big Brother/Chant of the Ever Circling Skeletal Family" was resurrected for the 1987 "Glass Spider Tour".

All tracks written by David Bowie, except where noted.

The album's original hinged cover is in excellent condition, displaying only minor signs of wear.

The album cover has a strong hinge and spine, displaying clear, printed script.