"Little River Band" is the first album by the Australian rock group Little River Band which was released by EMI in November 1975. It peaked at No. 12 on the Australian Kent Music Report Albums Chart. The band's first single, "Curiosity (Killed the Cat)", was released in September ahead of the album and peaked at No. 15 on the Kent Music Report Singles Chart. The following single, "Emma", appeared in January 1976 and peaked at No. 20. In May, the band released "Everyday of My Life" together with its album, "After Hours".

In September, the group left on their first international tour with support dates to Queen in London; then toured the rest of Europe. Next they toured the US as support to the Average White Band. The third single from Little River Band — a trimmed version of "It's a Long Way There" — was released in November and reached the Australian Top 40. To coincide with the tour, the album was released internationally and reached No. 80 in the United States on the Billboard 200 album chart in 1976. "It's a Long Way There" became the band's first US Top 40 hit. It also charted in Netherlands to reach No. 14. The next single, "I'll Always Call Your Name", also charted in the US but had no chart success in Australia.

All tracks are written by Little River Band members as shown. 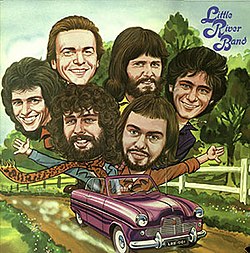 Both record centre labels are clean and unmarked.

* The man in black